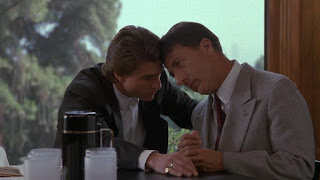 I suspect that this is the last Dustin Hoffman movie on The List, which is quite disappointing.  I think it actually might be the last Tom Cruise movie on The List too but I am less upset about that.  Oh no, horror of horrors.  I just remembered Magnolia.

Charlie Babbitt learns that his estranged father died and left the bulk of his estate to a mental institution that houses a brother he never knew he had.  Charlie is determined to get a hold of the money, since a recent business went south and he's desperate.  He meets his brother Raymond, an autistic savant.  Charlie takes Raymond out of the institution, hoping to gain custody of him thereby getting control of the money.  They travel to Los Angeles, but Raymond doesn't make for the easiest companion.

I am fighting to keep my eyes open, but I want to finish this post before I go to sleep.  I can't take the constant complaining that I don't post often enough!  Ahem...Anyway, I think the thing we all appreciate here is that the movie never enters sappy territory.  In fact, I read that the director wouldn't allow string accompaniment so that it wouldn't feel too sentimental.  And, of course, Dustin Hoffman is  perfect in his role.

Mental health issues can be a sticky topic for filmmakers, but they pretty much nailed here.  I mean, the mere fact that they had a character who stayed at a mental hospital and didn't end up murdering everyone was a step in the right direction.

Many airlines deleted the scenes where Hoffman would talk about plane crashes for in flight viewing.