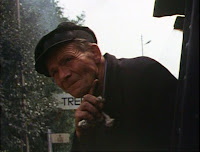 I am usually the first to complain about running times of movies, since some of these directors seem like they think they are paid by the minute.  But I really think this film is worthy of its nine hour running time and no, I'm not just saying that out of guilt.

Through a series of interviews with witnesses (some of them actual perpetrators), Shoah recounts stories of the Holocaust.  These kind of wartime atrocities always seem far removed from our everyday reality.  Shoah forces us to get close and realize that this isn't some distant historical event, especially when we are forced to listen to people actually involved with the evil doing, each one of them convinced that they weren't in anyway responsible for what happened.

I do believe that every minute of this film is important, but I can see why the length might turn people off.  Although I think it is already clear that this is not going to be the most enjoyable or comfortable time at the movies.  And hey, if people want a shorter film they can always watch Night and Fog.

No archive footage was used.
Posted by Amanda at 10:46 AM