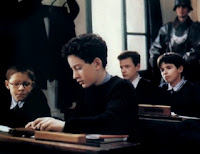 I remember watching this in my French class and trying not to get too emotional.  As I was determined to be invisible in high school, crying would have made my head explode with embarrassment (a rare but documented phenomenon).  Thankfully, since I am now alone in bed, I can cry to my heart's content.

Julien Quentin is a spoiled bully who attends a boarding school during World War II.  He soon discovers that the headmaster is granting asylum to young Jews, which include Jean Bonnet, a new student.  A friendship develops and Julien begins questioning the behavior of everyone in his life, including himself.

Our last Louis Malle film was Atlantic City, which I thought was rather horrendous.  With this film we have rekindled the old flame, as this reminded me heavily of Murmur of the Heart.  I don't often like movies staring children, but the actors here were perfect.

A heartbreaking story and one that deserves to be told.

Based on a real incident in Malle's childhood.
Posted by Amanda at 1:51 PM