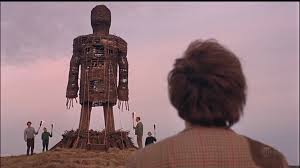 I wasn't particularly impressed by this movie and I hear the remake is an abomination.  I don't know how you could make it that much worse.  Trust Nicholas Cage to pull it off.

Sergeant Howie travels to an island off the coast of Scotland to investigate the disappearance of a young girl.  Howie is a devout Christian who doesn't believe in premarital sex.  He is shocked by the islanders' weirdness.  The islanders have sex in the fields and put frogs in their mouths for some reason.  They also try to hamper his investigation by denying the existence of the girl in the first place.

I think I have mentioned this before but horror is my absolutely favorite genre.  I worship it like these islanders worship the Wicker Man.  But I still didn't enjoy this one too much.  I thought the premise was a bit silly, although it was supposed to be quite frightening.  I also found it to be predictable and the acting to be a bit overdone.  Still, I happy we got a horror film on here.  Keep them coming!

Nicholas Cage claimed that the remake was supposed to be a black comedy and wasn't just unintentionally funny.  Whatever helps you sleep at night.

Christopher Lee appeared in this film for free. RIP.

Phillip Marlowe keeps showing up on The List, first with Dick Powell and then with Humphrey Bogart.  He also appears frequently on the 1001 Book List.  Personally, I prefer private detectives with a bit more personality, like Nick Charles.  At least he is a friendlier alcoholic.

Phillip Marlowe is asked by his friend Terry to drive him to Mexico.  It turns out that Terry's wife has been murdered.  Whoopsies.  Terry commits suicide in Mexico and as far as the police are concerned, the case is closed.  Marlowe believes there is more to the story.

I was a little bit uncomfortable with this movie.  It was a noir, but it was in color.  The novel is set in the 1940s, but the movie takes place in 1970s Hollywood.  But everyone stills acts like they would in a 40s movie.  Perhaps I am just being an old geeze.  Actually, I know I am being an old geeze.  Still, it hampered my enjoyment of the film.

Elliot Gould is a great actor, but I still prefer Powell or Bogart to Jack Gellar.

The fingerprint scene was improvised.

One of the earliest roles of Arnold Schwarzenegger's.
Posted by Amanda at 12:17 PM 2 comments: 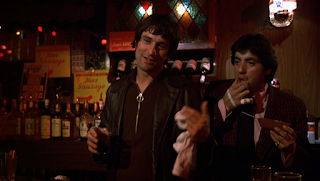 It is our first Scorsese film, ladies and gentlemen, and seeing Robert De Niro look so young touched my shriveled heart.  I think the actors' youth had something to do with the fact that I liked this a lot more than I usually like New York mafia movies.  The three main characters were so boyish it was hard to be mad at them.

I am about to reveal something rather shocking.  The Book makes a mistake in this entry.  The Book claims that Charlie and Johnny Boy are cousins.  And because Charlie is sleeping with Johnny Boy's cousin, that would mean...well, you can connect the dots.  However, Charlie and Johnny Boy are actually just friends so no incest is happening here.  HA HA HA STUPID BOOK!  I am sorry.  I think I am still harboring resentment from having to watch Pink Flamingos.

Ahem...anyway.  Charlie is trying to "make it" in the New York mafia, but must reconcile with his Catholic guilt.  Good luck with that.  He is also hampered by his FRIEND Johnny Boy who recklessly gambles and pisses off powerful men.  Charlie is also having an affair with Johnny Boy's epileptic cousin, who he, of course, is a total dick to.

Let's start with the good points.  The soundtrack to this film was fantastic.  Apparently, it was about half the film's budget, but it was worth it.  If you want to hear more dazzling musical insights like this, check out my album blog!  Anyway, I was laughing at quite a few scenes (seriously, what is a mook?) and found the characters to be, if not completely likable then at least not completely contemptible.  However, my sister pointed out that women in this movie are quite literally treated like objects.  They are thrown around, they are used as decorations, and it is not until Teresa starts twitching uncontrollably that anyone actually pays attention to her.  Well, at least one guy does...the other walks away.  Are my readers sick of me complaining about sexism in these movies?  I am too.

Martin Scorsese picked much of the music from the soundtrack from his own record collection.  I love this guy even more now.
Posted by Amanda at 9:05 AM 4 comments:

I absolutely love martial arts movies, so I was surprised I hadn't seen this already.  I am not sure why I love these films so much but hate boxing movies.  I guess I prefer sweaty, athletic Asian men to sweaty, less athletic Italian American men.  It's a personal choice.

Lee receives an invitation to attend a special martial arts tournament, hosted by the mysterious Mr. Han.  Han is supposedly involved in drug trafficking and prostitution.  Also, one of his bodyguards was involved in the death of Lee's sister.  So he is all around swell guy.  Lee proceeds to punch the criminal out of every guy he meets.

So like I said, I love this movie.  I am not sure I could adequately defend it, though, against its critics.  There is really not much to it, and if you don't enjoy witnessing Lee kicking things, you are going to be pretty bored.  I, however, find him fascinating.

Over 8,000 mirrors were used in the Hall of Mirrors scene.

Last film of Bruce Lee before his death.

Jackie Chan appears several times within the film and was accidentally struck in the face by a fighting stick by Bruce Lee.
Posted by Amanda at 10:04 AM 6 comments: 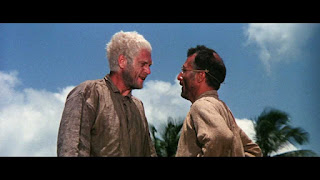 There are some great prison movies on The List, but none seem to portray the sheer hopelessness that is life in prison.  They also don't have Dustin Hoffman in Mr. Magoo glasses so, you know.  Added bonus.

This was a great movie, although, without giving it away, some of the sequences were profoundly disturbing.  In those circumstances, I might be trying to guillotine myself.  Both Hoffman and McQueen are excellent.

Great film, right up there with Shawshank.

The crew ingested a lot of marijuana while filming.  They boiled it and put it in drinks.  And I thought the brownies were disgusting.

Theft from the locals was a problem and around $3,000 worth of damages occurred.
Posted by Amanda at 9:13 PM 4 comments: 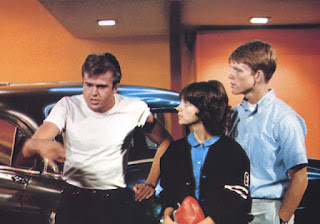 I know it is an extremely unpopular opinion to dislike anything that George Lucas touches, but I found this movie to be an incredible bore.  Angsty teens living in a small town...where have we seen that before?  I didn't like it in The Last Picture Show and I didn't like it here.  I prefer my bildungsroman to come from Dickens, thanks.

Teenage boys aren't content with their accessible girlfriends so they chase impossible ideals.  I don't have to watch this on the big screen; I went to high school.  As a side note, I swear I saw James Franco in this one.  Don't ask me how, but he was there.

So like I said, this film is a bit of a drag.  Maybe men will better relate to this film but I found all the characters obnoxious and the main character's dilemma absolutely insane.

Wanted to like it, but just couldn't manage it.

George Lucas missed his high school reunion to work on this film.

First Bonnie and Clyde, now this, then Natural Born Killers.  People really like the idea of running off with possibly homosexual men and going on bank-robbing, murderous rampages.  People are such hopeless romantics.

Holly is a fifteen year old girl who attracts the attention of a slightly rape-y twenty-five year old Kit.  Her father (who also gives off a rape-y vibe), of course, opposes their romance.  Kit kills her father.  As we learned from West Side Story, offing family members isn't exactly a deal breaker, and Holly joins him on his crime spree.

I actually really enjoyed this movie, although after the last one, any film with a plot has me singing its praises.   A bit more violent than Bonnie and Clyde, but I found myself caring more about the characters.  Also absolutely beautifully shot.

A solid entry in a very peculiar genre.

Based on real life murderers Charles Starkweather and Caril Fugate.

That was one of the most boring cinematic experiences of my life.  Not only did nothing happen, but nothing happened for nearly four hours.  I thought I had put the worst of this behind me.  I thought when I got through 2001 I had seen the worst.  Not by a long shot.

What even happened in this film?  There is a love triangle in France.  Right now all that is sticking out is the scene where the woman asked Alexandre to take out her tampon during sex.  Well, I guess the whole point was that the tampon was not sticking out, but that's besides the point.

Watching a horrible movie like this is a boring event in itself.  It is even worse, though, when you don't have anyone to complain with.  I watched this movie alone since no one in their right mind would voluntarily watch this.  Anyone want to complain with me in the comments?

Based on the romances of the director.
Posted by Amanda at 8:05 PM 2 comments: