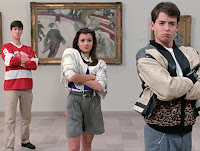 I think that this is a film that literally everyone can relate to.  I remember my high school math teacher used to play this for us when he didn't feel like teaching.  Most of his word problems started with "If I hang myself at this angle..." so perhaps there were deeper issues there.  Anyway, my point is high school is bleak and I think adults tend to romanticize the time spent there.  At the very least I am sure we all fantasize about skipping work.

Ferris Bueller is a high school senior who decides to play sick to get out of going to school.  He frequently breaks the fourth wall and advises the audience on how to emulate his carefree lifestyle.  He quickly recruits his girlfriend Sloane and his best friend Cameron to join him for a day of fun in Chicago.  Principal Rooney (who is creepily obsessed with Ferris) realizes that he is playing hooky and tries to catch him in the act.

I thought Ferris was a fascinating character.  His need to always be the center of attention reminded me of a lot of people I went to high school with.  Of course, I was too nerdy and weird to talk to most people in high school, so someone like Ferris wouldn't even have been aware of my existence.  In a lot of ways I relate to Cameron, who always seems to have a nervous breakdown at the thought of getting in trouble.  Anyway, this film lets the nerdiest among us live out a fantasy.