Stand By Me
1986
Directed by Rob Reiner 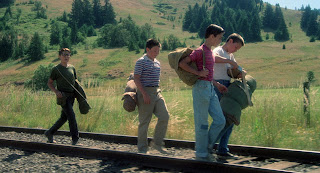 Much like A Christmas Story, this is a film I had a bit of trouble connecting with, as I was never a young boy (despite what a few doctors have said).  I also didn't live in a neighborhood where all the children would play together; mostly we would just make awkward conversation at the bus stop.  A movie that depicted my childhood would just be a stationary shot of a girl reading by herself for nine hours.  Maybe Chantal Akerman could film it.

A group of young boys set out to find a dead body rumored to be near the railroad tracks.  As the film progresses we learn about the boys' dysfunctional families and individual issues.  So basically like The Breakfast Club only with younger, less interesting characters....who are already friends.  Okay, maybe that's not the best comparison.

So obviously I don't have to relate to every single character to enjoy a film.  But I certainly wasn't the audience for the movie, as evidenced by the disgusting pie scene that we were supposed to think was hilarious.  I also found the ending a bit hard to believe.  I won't give anything away, but I felt like the stakes weren't high enough to justify everyone's actions.

Just not a film for me, so my feelings lean more towards indifference than actual dislike.

Stephen King thought this was the best adaptation of his work that he had ever seen.