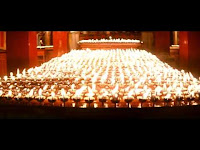 I kind of knew going into this that it would be a chore to get through.  I knew that it had very little dialogue, so I resigned myself to just enjoying it as a visual spectacle.  Unfortunately, it didn't really deliver on that front either.

The movie tells the story of Norbu, a horse thief.  Yes, I know that is obvious, but give me break.  Not a lot happens in the film and the few compelling events are relayed in such a dull way that it was hard to pay attention.

Like I said, I expected to be in awe of the visuals in this film.  I suppose there were moments of beauty, but there were also several instances of animal cruelty. I am 99% it was all real, which is quite upsetting to me.  I whine so much about sexual violence though I guess I can let this one go.

Sorry for such a short review.  It was just kind of forgettable and one that I could have happily skipped.

Martin Scorsese's number one film of the 90s.  It came out in 1986 but I guess it didn't really make it to the United States until the 90s.  And if you are Martin Scorsese you can just arbitrarily change facts at your leisure.
Posted by Amanda at 12:51 PM