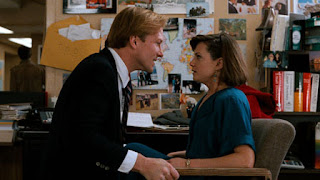 I think I have to embrace the fact that I like William Hurt.  He is apparently a horrible and abusive man, but I can't help it; I really enjoy watching him on screen.  Damn it, Hurt.

The film follows three characters who work in news.  Jane Craig is a workaholic producer who is secretly loved by her friend Aaron Altman.  Jane finds herself attracted to the new news reporter, who is sexy and charming but vacant.  Who will she choose?  At the beginning of the film I thought "If she doesn't choose Aaron I am going to scream."  I really have a decent grasp on reality, don't I?

I really loved this movie.  It seems a lot of people only see the romantic comedy genre as a guilty pleasure, but there are some truly brilliant films that fall under that category.  The cast is obviously amazing. The ending isn't entirely pleasing, but I still appreciate that the "career woman" wasn't portrayed as some sort of cold robot who is dangerous to society.

A great film and one that is getting me pumped for When Harry Met Sally!

Debra Winger was originally going to play Jane Craig but had to be replaced when she got pregnant.
Posted by Amanda at 1:51 PM