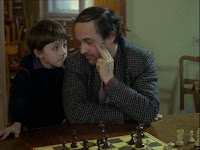 I hope this information doesn't cause any of my followers to have an aneurysm, but I did not watch the entire series of The Decalogue.  Allow me a little background for those of you who have never heard of this.  The Decalogue is a ten episode mini series, each story having some connection to one of the commandments.  The Book lists "Dekalog Jeden" as the entry.  "Jeden" is Polish for one, so I think the Book refers to the pilot, not the entire series.  This is also supported by the running time it lists, which is 54 minutes (the entire series is roughly 572 minutes).  I seem to be one of the only list followers who takes this view, as other blogs I have found consider this to be the longest "film" in the Book.  I was open to the idea of watching the rest of the series if this episode grabbed me, but unfortunately, I was disappointed.

Krzysztof is a single parent, raising his son Pawel with the help of his sister Irene (or possibly his sister in law, I'm not sure). Krzysztof teaches Pawel son to think scientifically and seemingly does a good job, as Pawel is very intelligent.  Pawel is also really good at chess, which in movies translates as a genius.  Things...happen from there.  It is hard not to give away spoilers, as the episode is less than an hour.

It's pretty random that the book included this, as it hardly qualifies as a movie.  The 1001 Books people pulled this too by including A Modest Proposal with a thousand novels.  Those scamps.  Anyway, it was hardly brilliant; in fact, it was pretty upsetting (although I guess that doesn't really count as a valid criticism).  I suppose the boy was adorable and the premise of making a story for each commandment is interesting enough.  It reminds me of when my mother forced us to take Sunday school lessons and we each had to draw a commandment (I think I chose kill).  I am not sure which one this connects to; maybe honoring your father or having no other gods (i.e. the computer)?

Wow, I am really rambling a lot so I will try to wrap this up.  I am not quite certain what Kieslowski's message here was. Was it supposed to be some moral lesson?  I don't think the characters did anything wrong or need to be punished for their perceived sins.

I can't help thinking there must be a better Decalogue episode that the 1001 list makers could have recommended.  The rascals.