782. Hotel Terminus: The Life and Times of Klaus Barbie

Hotel Terminus: The Life and Times of Klaus Barbie
1988
Directed by Marcel Ophuls 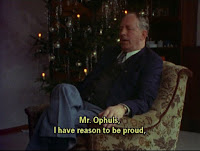 In my previous post, I was just going on and on about how Cinema Paradiso will make you appreciate art and humanity.  Now we have a documentary about one of the most sadistic men in history.  Maybe I should have watched Cinema Paradiso after this...

Through a series of interviews, the life of Nazi war criminal Klaus Barbie is pieced together as Ophuls attempts to answer the question: how could someone be so evil?  We hear from people like Barbie's defense attorney, journalists, and victim's families.  It is chilling to listen to his supporters.  I don't know how Ophuls got through filming without lunging at his interviewees.

This is obviously a very disturbing movie.  It makes me wonder how many other people would commit these horrific acts if given access to enough victims.  It is not an enjoyable film, but perhaps one everyone should see.  I do feel like I say that a lot, and really, how many Holocaust documentaries should one person have to sit through before you can say you are done?  Maybe this will be the last one, but it certainly made a memorable impact.

Ophuls did not use footage from the Holocaust, as he believed the audience was too desensitized for it to make an impact.
Posted by Amanda at 9:15 AM