The Fly
1986
Directed by David Cronenberg 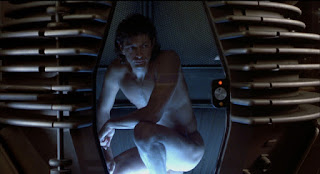 I was completely disgusted by Videodrome (which I suppose was the point) and had no desire to watch anymore David Cronenberg films (which I suppose wasn't the point).  I did get excited about this remake and while it is not a favorite, it certainly isn't a candidate for the worst movie of the 80s.

Seth Brundle is a brilliant scientist who has recently developed teleportation pods.  While the pods successfully transport inanimate objects, gross things happen when Brundle tries to transport living things.  He shows off his invention to Veronica, a journalist, and the two begin a relationship because what is hotter than science?  One night Brundle gets drunk and attempts to teleport himself.  Unfortunately, he doesn't notice that there is a fly inside the pod with him and things get even grosser as he slowly becomes an insect.

I am not sure that the filmmakers succeeded in making us sympathize with Brundle.  I felt like we were supposed to feel great compassion for him (especially at the end) but I thought he was an asshole from the very beginning.  I suppose that doesn't matter, since the main purpose of the movie is to have the audience ooh and ahh at the special effects.  Or ooh and vomit.  Either way they were quite well done, even if that isn't my preferred type of entertainment.

I don't sound too positive, but I actually did enjoy most of this.  The acting was surprisingly good and the film never lagged.  Still prefer the original though.

Jeff Goldblum and Geena Davis were dating at the time.