I would have never thought of comparing the movie Shaft and Dirty Harry but reviewing them back to back makes me realize that they are actually quite similar.  So why do I hate Shaft and like this movie?  God, I hope the answer isn't "because I'm white."  Thankfully, I don't think that's the case.

A psychotic serial killer named Scorpio demands $100,000 from the police department and promises to kill somebody every day until his ransom paid.  He then proceeds to keep his word with great gusto.  It seems like the only one who can stop him is the equally insane police detective, "Dirty" Harry Callahan.

Parts of this film are extremely disturbing; I would classify this more under horror than action.  I do think the movie takes itself a bit too seriously at times, though I would have to reveal a spoiler to explain why, so I will refrain.

Harry Callahan is a major dick, but we are still end up rooting for him, since he is the lesser of two evils.  And isn't that what justice is all about?

Andrew Robinson created his own back story for his character, which involved his character fighting in Vietnam and seeing all sorts of tragedies.  Well, it was the seventies, so you have to plug Vietnam in there somewhere.

Loosely based on the Zodiac killer.

"Dirty Harry" is apparently a slang term for a photographer. 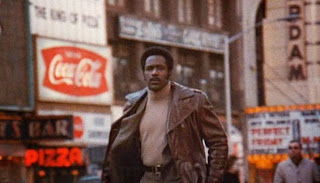 There are very few things about this film that don't make me cringe.  "Who's the private dick that's a sex machine to all the chicks?"  "But no one understands him but his woman"?  Does "his" woman realize that he is screwing other people?  And are we really blaming his infidelities on being "misunderstood"?  Give me a break.  I mean, the character's name was Shaft, so I wasn't expecting anything marvelous.  Still, I am seriously going to break something if I have keep rolling my eyes so hard.

I guess I will defend its place in the Book since it is such a cultural icon.  Still, I feel like it is complete shit masquerading as progress.  We certainly need more films produced and directed by African Americans, especially during the seventies, but is this kind of movie that should fill that void?  I really don't think so.

Anyone have thoughts on the remake? 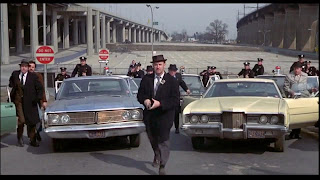 This is a film that I feel like no one talks about anymore.  Perhaps I am wrong about that, seeing as I do my best to not talk to a whole lot of people.  But everyone that has seen it seems to love it, so it is really a shame that it has fallen off the radar a bit.

Basically, two cops try to stop drug dealers.  Of course, all anyone can really focus on is the car chase at the end.  THAT WAS SUCH A GREAT CAR CHASE AT THE END!  Sorry, I had to get that out of my system.

There are plenty of other tense bits to enjoy in this film.  It's always great to see Roy Schieder in anything; I would watch that man put together an Ikea desk.  It does suffer a bit from the "wait...who is that?" factor that affects many action films.  But guys: car chase.

Roy Schieder and Gene Hackman patrolled with real police detectives for months to prepare for their roles.  Hackman especially was disgusted with what he saw.

Get Carter
1972
Directed by Mike Hodges 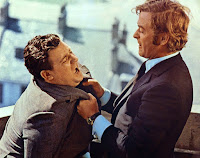 This doesn't seem to happen a lot with seventies movies, but I really feel like this film could have been released yesterday.  A young man searches for the truth behind his brother's murder?  I could have sworn I saw a Harrison Ford or Tom Cruise movie with that exact same premise.

There are, of course, things that set this movie apart. For one thing, it is not just a hot man running.  Michael Caine brings something deeper to the role.  He is actually quite frightening at times.  There are also darker twists that I am not sure would fly with modern audiences.  I felt the same with Chinatown.

Not really my style and if I am going to watch a British guy beat up criminals, I would rather it be James Bond.  Still, any Caine film is worth a watch.

A six-fingered man can be seen sitting at the bar.

Based on the life of real life gangster Jack Carter.

Remade with the lead role being cast to Sylvester Stallone.  I am sure he succeeded in bringing the quiet dignity to the part, just like Caine. 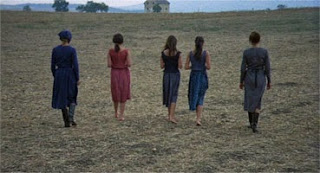 Well, it's been rough.  I have been trying to find this film everywhere.  I had a friend download it for me.  After taking approximately a thousand years to download (at one point the estimated download time just had the infinity symbol), I was told I had the wrong codec.  I finally found it online, but only with Spanish subtitles.  I ended up watching it with Google translate open on the right.  I would pause periodically to type in and translate the subtitles then continue.  Is there even a way you can enjoy a film if you watch it in such a ridiculous way?  However, I am assured by my sister that I would hate it no matter what.

This movie is a musical of sorts I suppose.  Peasants in Hungary rebel, although they seem much more interesting in cramming in as many folk songs as possible.  And then all the women get naked.  Perhaps this was lost in translation, but I really wasn't clear on the reasoning behind this.  It felt pretty cheap to me; like a last ditch effort to make the movie somewhat interesting.  Of course, the filmmakers would claim it is art.

Such a drag.  It has been a real struggle get through some of these seventies movies and oh my god, we are only on '72.