Bridge on the River Kwai
1957
Directed by David Lean 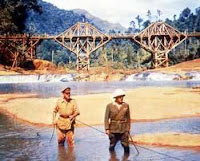 Wow.  If there was ever a movie made exclusively for men, it is this one.  I enjoy a lot of movies that were made for a male audience, but this film is my breaking point.  I mean, it is a movie about the construction of a bridge.  I get bored just thinking about it.

I think this film is excessively long and incredibly boring, but there is no denying that is beautiful.  Even the picture I have above shows that the color and the cinematography is just gorgeous.

The Japanese want the captured British soldiers to build a bridge.  They don't want to build the bridge. Oh wait, yes they do.  Oh wait again, now they want to destroy the bridge.

All right, so obviously I am simplifying what some consider to be the greatest film of all time.  In fact, readers who are die hard film buffs are probably convulsing in their seats right now.  Still, I just could not get into this movie; it is not for most women and certainly not for me.

David Lean almost drowned during filming when he was swept into the river but Geoffrey Horne saved is life.

Alec Guinness was initially hesitant to play the role of the Colonel because the character seemed so dull.  You got that right.