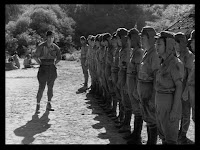 As you probably know by now, I am a huge fan of Japanese cinema.  I really love how it can be so emotional without being too sentimental.  Unfortunately, this film totally crossed the line to sappiness.

So first of all, if you know anything about what happened in Burma, you know that what they show in this film is complete bullshit.  No, they did not lose the war because they spent too much time singing.  Just had to clear that up.

This is the story of a Japanese battalion that is defeated by the British.  After they are captured, they send their harpist to convince the other Japanese battalion to surrender.  That fails so the harpist decides to spend his time burying Japanese soldiers.  Cue the violins.  Although, I suppose in this case, it would be more accurate to say cue the harps.

I suppose the more sensitive people among us would be weeping at this film.  I, however, thought it was ridiculous.  Making a war musical is a bold move and it really did not pay off here.

Way too sentimental and I am deeply disappointed.

One of the first Japanese films to deal with pacifist themes in WWII.