Written on the Wind
1956
Directed by Douglas Sirk 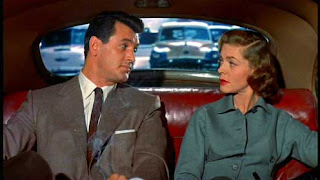 I have reached a point where I have seen about fifteen movies in a row (the downside of going chronologically) so you will be getting a lot of posts soon.  Usually, I like to get them all done at once but even an experienced blogger like myself may not be able to write that much in one stretch.  Still, I will do my best.

All right, this was considered a "woman's weepie" film upon its first release.  I know that term is derogatory towards women but it is really fun to say.  Anyway, now it is critically acclaimed and recognized as a masterpiece so it made the list.

This movie is like a soap opera; or rather, what I would imagine a soap opera would be, since I have never actually watched one.  Suffice to say, it is extremely melodramatic and has so many improbable plot lines that it would be really hard to explain.  Let's just say there is a love triangle between Rock Hudson, Lauren Bacall, and Robert Stack.

First of all, what a great cast.  I am used to seeing Rock Hudson with Doris Day and Lauren Bacall with Humphrey Bogart so I was a little unsure about seeing them without their better halves. However, the two fared well together and had enough chemistry to make it believable.

Also, the movie gets points for being only 90 minutes; any longer and I would have been exhausted.  Still, the film does border on ridiculous at times.  In fact, if I fell in love with this film, I would consider it a guilty pleasure, not a must see film.  As is, it was entertaining but not essential viewing.

Based on the life of Zachary Smith Reynolds.

Bogart disliked the film and urged Bacall to not make another film like it.

It is implied that Kyle is gay.  This went completely over my head.
Posted by Amanda at 10:10 AM