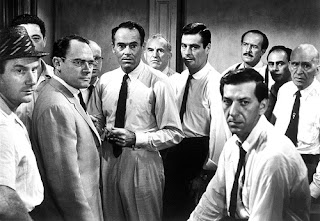 What a great movie.  This is a classic that everyone should see or has already seen.  I was talking to some coworkers recently who didn't know I had seen it yet.  They warned me that I might not like it because it is in black and white and I am so young.  They obviously do not know me very well.

This film takes place almost entirely inside the jury room as Henry Fonda tries to convince the jury that the man on trial is innocent.  While this may seem like it could get dull after awhile, it is actually entertaining and wonderful until the very end.

I have never actually been on jury duty but like the book suggests, now I am going to imagine myself as Henry Fonda when I am finally a jury member.  The idea that a group of strangers could come together like that and then walk away and carry on with their lives is poignant and I enjoy watching movies with that theme.

There are twelve jury members that the camera is on for pretty much the entire ninety minutes and not one of them is anything less than magnificent.  Just a great film; if you have seen it yet, for shame!

None of the twelve jury members are still alive.

Lost all of its Oscars to The Bridge On The River Kwai.  Oh come on!
Posted by Amanda at 4:21 PM