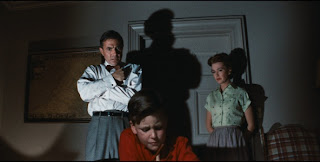 This is one of the movies that starts normally and gets out of control very quickly.  First we have a normal schoolteacher who has to get a second job as a cab driver too make extra cash.  Suddenly, we have a man that is addicted to drugs who wants to kill his wife and mother, The Shining style.

Yet another film that takes a crack at suburban life.  I am not complaining, but we have had quite a bout of these movies lately; I guess the idea of suburbia has lost its charm.

Let's start with my complaints.  First of all, I am used to tacked on endings because of the production code.  Still, this film really needed a different ending.  I will not go on further because of my spoiler policy.

As for the rest of the movie, James Mason is a great actor and the middle part (the ending was stupid) was genuinely exciting.  The film also has a great line: God was wrong.

Marilyn Monroe had a brief cameo but it was ultimately cut from the movie.