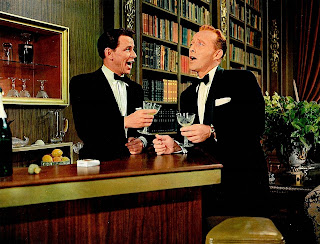 High Society is a great movie.  I remember I first watched this one at a musical movie night with my sister.  We also watched Moulin Rouge!.  Both these films would go on to become my favorites.  Man, that was a good night.

High Society is a remake of The Philadelphia Story.  I may be slightly biased because I saw this film first, but I have always preferred this version.  It is hard to compete with the original cast but bringing in such great songs was exactly what the story.  Also, I have a girl crush on Grace Kelly.

Grace Kelly is about to marry a boring rich guy when her ex husband shows up.  Additionally, Frank Sinatra comes to report on the wedding and (naturally) falls for Grace himself.  Well, actually, her character's name is Tracy, but he was probably into Grace too.

If you still need to be sold, watch these music videos and observe the great vocal chemistry between the actors:

Still not convinced?  Well, then you are soulless and beyond help.

The game show "Who Wants To Be a Millionaire" adapted its title from the song in the movie.