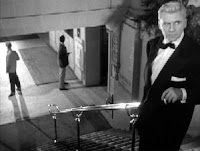 I would consider myself a film buff but I know very little about the French New Wave.  This movie apparently set the tone for the entire New Wave so I was excited to watch it and start learning about the movement.  And, yes, I do realize that I sound like a huge nerd.

This movie is about Bob, who after a streak of bad luck, decides to rob someone.  Oh and, of course, there is a dame.

So, for starters, we have a likable criminal.  While we have seen this before (Pepe Le Moko, anyone?), it is still a rather original concept for the time that has now been turned into a cliche.

Other than that, there were not a whole lot of things about this film that I liked.  Although the plot sounds like it would be super exciting, the movie is surprisingly dull.  The action does pick up towards the middle but by then, I had already lost interest.

I would still recommend checking it out but this isn't exactly the best of the crime  genre.

Said to be the height of French films inspired by American film noir.

Stanley Kubrick said that he never wanted to do a crime film because Melville had already done the best with this picture.