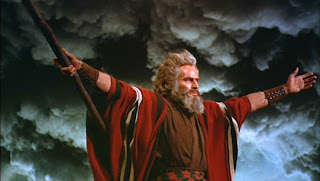 All right, first I have to get some bragging out of the way.  I recently visited the site on the Paramount lot where the famous parting of the sea scene was shot.  Now it is a parking lot most of time, except when they need a big water scene for a film.  Now that that is out of the way, let's get to ripping this film apart.

First of all, it is 220 minutes which is just ridiculous for any movie, let alone a film as stupid as this.  I guess I could start with all the historical flaws.  Now, I am pretty forgiving with flaws in movies but these errors are so glaring that if you have any historical knowledge, they will piss you off.  For starters, they picked Ramses II to be the pharaoh?  Why not just make one up?  Instead, they picked a pharaoh that we actually know a lot about historically and they don't even get his wife's name right.

Also, we have Charlton Heston here who is just a terrible actor in general.  The book seems to recognize that this movie is a piece of shit but I guess because it has pretty colors and some special effects, they are very forgiving.

It is also disgustedly racist; Moses only seems to care about the Hebrews and is perfectly content to watch other races suffer.  I am just getting angry thinking about this movie, so I will wrap it up now.

So stupid but maybe you will be distracted by colors.

DeMille had a foot fetish, which is evident in the original cut of the film.

DeMille had a heart attack while filming the movie.

Email ThisBlogThis!Share to TwitterShare to FacebookShare to Pinterest
Labels: Cecil B. Demille