310. Invasion of the Body Snatchers

Invasion of the Body Snatchers
1956
Directed by Don Siegel 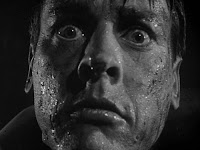 Moving right along, we have another movie about the danger of conformity; it is easy to say that this film is an allegory for McCarthyism.  The filmmakers claim that no political message was intended.  However, the movie seems so deep that you can pretty much apply any political issue to this film.

But before we get into that, let's get to walk the film is on the surface.  This is the story of Dr. Miles Bennell who soon discovers that some of neighbors are in fact impostors that are being grown by some unknown alien force.

Like I said, I am inclined to believe that this is an anti-McCarhyism movie, mostly because I have seen about fifteen films so far in the fifties that have that message.  Still, I think the film has an ageless quality that makes me think it is more about the power of individualism and less about current events.

Like all good horror films, this movie relies more on psychological horror than blood and gore, which I suppose is why the movie is so timeless.  Also, surprisingly good acting for a B movie. A great movie.