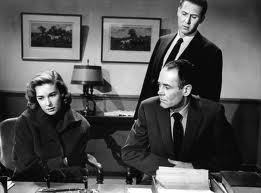 Alfred Hitchcock often makes films that are our nightmares, whether it be birds attacking the human race or being attacked by a serial killer.  However, a lot of people's worst nightmare is the idea of wrongly being accused of a crime and Hitchcock fully explores that idea in this film.

This movie is based on the true story of a jazz musician wrongly identified as a man who held up an insurance office. This leads to his entire family falling apart.

This is a chilling film, if not outright scary, at least one that will resonate with you.  This movie is shot in semi documentary style.  The camera stays on Henry Fonda as he fingerprinted and booked.  Most movies would cut away but Hitchcock forces us to watch the entire process which made me extremely uncomfortable.

Like the book said, this is one of the bleakest Hitchcock movies yet. Actually, I think it is safe to say THE bleakest movie.  Still, it is an entertaining movie; Fonda is always great.  We are really on a great streak of movies.

HITCHCOCK RADAR: He narrates the prologue.

One of the prisoner's shouts "What'd they get ya for, Henry" when Fonda walks by the cells.
Posted by Amanda at 2:53 PM