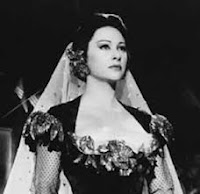 You would think that a film about a prostitute recounting her life as a circus attraction would be quite an interesting movie.  You would be wrong.

Some parts of the movie are quite beautiful.  There is a great use of Technicolor here, almost too the point of being gaudy but hey, it's the circus.  To make you feel like part of the action, the director put objects in front of the camera so you feel as if you are watching the circus.  However, if I was at the circus watching this performance, I would have gotten up and walked away because it was so freaking boring.

This is a really short review, but really my feelings can be summed up this: sets good, story bad.  After all, brevity is the soul of wit.  So says Polonius anyway.