The Searchers
1956
Directed by John Ford 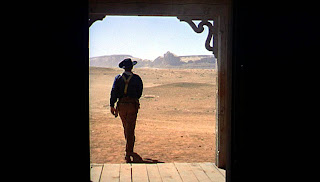 This is one of my favorite films of all time.  I even wrote a paper on it in my first year of college.  We were supposed to pick a film dealing with race or class relations.  While most people picked Grease or West Side Story (some ballsy kid even picked Harry Potter and the Chamber of Secrets) I chose this classic.  Of course, no one in my class had ever heard of this movie and kept referring to it as The Seekers.  Sigh.

But this movie should be watched by everyone at least once.  This is by far the best western I have ever seen.

John Wayne plays Ethan, who is a Confederate soldier home from the war.  He visits his brother's home, and it is quite clear early on that he is in love with his sister in law, Martha.  Ethan then goes out to help a neighbor find his cattle and when he returns, he finds that the Comanche tribe has killed his brother's family and kidnapped his two daughters.  Ethan begins a quest that lasts for years to find his nieces, though his intentions may not be as noble as they appear.

Wow, where to begin.  I almost prefer writing reviews on movies I hate; it seems easier than trying to explain all the wonderful things about this film is a paragraph.

First, we have John Ford, so, of course, the scenery shots are beautiful and iconic.  As far as acting goes, I am not a huge fan of Natalie Wood and I know a lot of people think John Wayne is wooden.  However, I think John Wayne is great in this film.  Maybe it is because he plays a racist, cold, and emotionally detached hero and that is really just how he is in real life.

All westerns are pretty racist against Native Americans; that is just an unfortunate guarantee.  However, this film at least starts to move in the right direction.  For starters, one of the main heroes in this film, Martin is part Cherokee.  For another thing….I am totally moving into spoiler territory.  You will be able to figure it out yourself.

Damn, have I really written that much already?  I should wrap it up.  The questions posed in this film are great; I guarantee this is a movie that you will be thinking about for a long time afterwards.  An absolute must see.

Voted the Greatest Western of all time by Entertainment Weekly.

John Wayne named his son Ethan in tribute to this film.

Ward Bond would walk around his motel room naked with the windows open in hopes of attracting Vera Miles.  He should really watch the Seinfeld episode about Good Naked vs. Bad Naked.

AFI's #12 greatest movie of all time.

Inspiration for Buddy Holly's song "That'll Be The Day".