Rebel Without A Cause
1955
Directed by Nicholas Ray 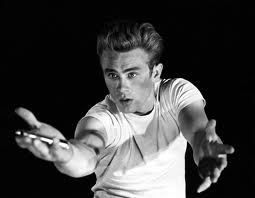 For some odd reason, it has become some sort of trend for women my age to be really into James Dean.  Most have only seen this film, of course, but a lot of women I know have various James Dean paraphernalia.  I say it is odd, because these women have no interest in any other films from this time and it just seems really random.  It probably has something to do with Dean's early tragic death and that fact that he is insanely handsome.  Still, it is kind of weird because I have always thought that though Dean's career was too short, he was a merely okay actor.

I guess that is one of a million things that I don't understand about my fellow humanoids.  Anyway, let's move on with the actual film.

This is a story of teenage angst and the feeling of being a complete ass without any real reason to be one (hence the "without a cause" part).  Within the film, Dean gets the girl, defies his parents and bullies, makes friends with the underdog, and is the indirect cause of some gruesome deaths.

Now, onto what I like.  I like seeing this side of American youth. When you think of 50s kids, you think poodle skirts, Grease, and malt shops.  This is certainly a more accurate and gritty depiction.  I suppose this film is also suppose to remind you of your own feelings when you were a teenager.  Now, I was a complete loser-nerd in high school who never left my house, so I really could not relate.  However, I am sure most people can.

Overall, I will give it four stars.  Warning: even if you like this movie, you will walk away feeling slightly disturbed and possibly sick.

Nicholas Ray rode around with Los Angeles gangs for research.

Real switchblades were used in the fight scenes and the actors were protected by chain mail.

T-shirts sales soared after the release of this film.

All three young actors in this film had early unnatural deaths.

Plato was intended to be gay.  Although they could not say it outright because of the production code, there were heavy hints throughout the movie.