The Night of the Hunter
1955
Directed by Charles Laughton 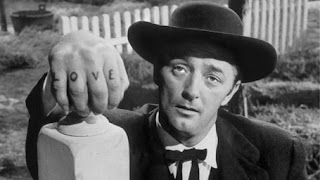 Anyway, what a great way to kick off the 300s.  A lot of these films are pretty dated; you won't find a 2013 dealing with the a tribe of murderous Apache Injuns or a Sam Spade mystery.  However, this film is a great thriller that has really stood the test of time.

This is the story of a religious man turned serial killer (hmmmm who has imitated that concept?). 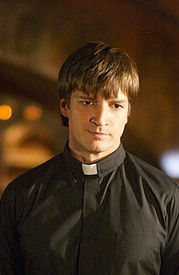 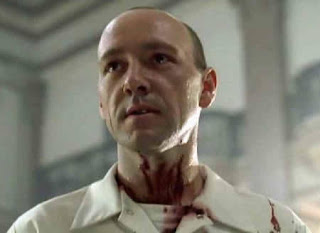 But I digress.  Creepy McCreepystein woos a widow whose husband hid a large sum of money away.  He then attempts to find and take the money away from her and her two kids.

So first of all, we have a great villain here with Robert Mitchum playing the role of his lifetime.  It is hard to get creeped out by a fifties film but Mitchum certainly provides chills.  In addition, the movie's real heroes are two children.  Children are often annoying in lead roles but these kids were charming and strong.  Lillian Gish also stars in this film, which brings me back to the early days of this blog.

I really have no complaints. The plot is fast paced and exciting and the style is beautiful and unique.  A must see film.

Harry Powers, a Dutch serial killer, was the inspiration for the preacher in this film.