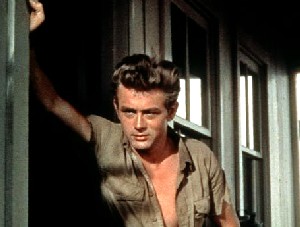 All right, I know I said earlier that James Dean was not that great of actor but was a pretty face who died too soon.  I still stick by that, but in this film, he definitely showed some great potentially.  If it wasn't for his untimely demise, he might have become a great actor.  I still haven't seen East of Eden (which isn't on the list) so I suppose I will make my final decision on him then.

Still, there is no question that Elizabeth Taylor and Rock Hudson are both great actors and I think they give their best performances here.  There, that is everything I liked about the film.  As for what I didn't like…

Man, that was boring (no oil pun intended).  I cannot even give a good plot summary since the film was over THREE HOURS LONG!  They are not fooling around with that title (okay, there a pun was intended).

Now, I can stand really long movies as long as the action keeps on coming and the plot keeps me entertained.  However, the film is pretty dull.

So great performances but that didn't stop me from being out of mind bored.

Usually, epics like this movie would take older actors and put make up on them to make them look younger.  However, this film did the opposite, which would become the standard practice later on.

James Dean died during the making of the film.

Dean's nickname for George Stevens was "fatso".
Posted by Amanda at 10:46 AM