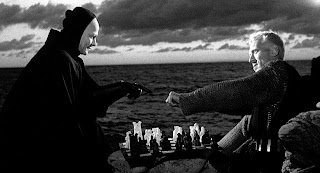 Groan, Ingmar Bergman.  He is to elitists what Carrot Top is to douchebags.  Oddly enough, though, I had already seen this movie, despite my disliking for him.

A man plays chess with Death in order to get his life back.  This is a concept that has been done to death since; hell, even the Sims has made this a feature to save yourself from the Grim Reaper.  Not that I play Sims, I am way to old for that.  Ahem.  Moving on.

Other stuff happens, of course, but this is the iconic image that has allowed the film to endure so long.  I am boring myself by saying this about another Bergman film but really, these movies are painful to sit through.  Nothing ever really happens, which I could forgive if the dialogue was half good; unfortunately, it isn't.  I know a lot of film buffs will disagree with me, but some films I am just not going to like.  Unfortunately for me, and I guess the reader, there are around fifteen Bergman films on the list.

Bergman said he was inspired by Kursosawa.  NO!  You do not get to say that!

One of Bergman's favorite films.
Posted by Amanda at 5:16 PM