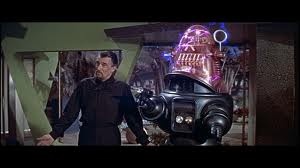 No genre of film dates more easily than science fiction.  My brother cannot even watch sci fi from ten years ago because the outdated graphics annoy him so much.  He could possibly just be saying that to annoy me, however.  In any case, Robby the Robot is not exactly a timeless character.

Outdated graphics have never been a problem with me.  I think most people will be able to enjoy this movie if you can look past the cheese.

This movie is based on William Shakespeare's "The Tempest".  I am pretty sure we have seen an adaptation of nearly every Shakespeare play on the list.  Anyway, I have written enough Shakespeare papers for a lifetime so I am not going to spend a lot of time talking about the plot.

I think the special effects in this film are quite fascinating. Now, I am a bit of a science fiction nerd so I may be biased, but seeing what the filmmakers could do with such limited technology is truly amazing. Maybe in seventy years people will be saying that about 2013 movies.

Definitely recommended.  I have been saying we need more Shakespeare in Space productions for years.

Many of the sets and props were used in later Twilight Zone episodes.

The movie poster was ranked #5 in Premiere's 25 greatest film posters.