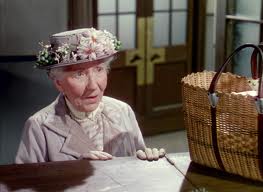 Previously, I have complained about not fully "getting" British comedy.  It is not that I don't think their jokes are funny, it is that I can't understand when they are making jokes.  I actually don't have this probably with British literature, which I have found quite funny in the past.  Anyway, this is another movie that I didn't find amusing in the slightest.

A lonely old woman lives by herself and has no one in her life so fills her time by making ridiculous accusations about her neighbors to the police. See, it's funny because of how pathetic she is!  Anyway, a gang of criminals rent one of her rooms and convince her that they are actually a string quintet. They plan on pulling off a heist but the old lady gets too wise so they decide to kill her.  See, it's even funnier because if they did, no one would care!

A younger actress was cast before Katie Johnson but died before filming began.

Peter Sellers did the voices of the parrots.  Groan.  Peter Sellers.
Posted by Amanda at 1:13 PM