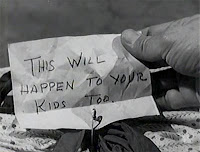 Wow.  How they got away with this movie is beyond me.  Not only is this the most violent movie yet on the list, but it also depicts the corruption and racism that took place in the south during this time.  I suppose this film was not censored because it is such a B movie.

This film is about an all out war on the racism, protestation, and organized crime that takes place in Phenix City.  Along the way, we get some truly gruesome deaths including that of a little black girl.  That case is dismissed immediately, though, because, well, this is Alabama in the 50s.

Like I said, this is a B movie so the acting could be better.  The screenplay could have been better as well; most of the lines sounded a bit hokey.

This is not a movie that is particularly enjoyable to watch.  The violence and racism made me feel slightly sick and I was very glad when the movie ended.  Though I do not want to spoil anything, I was very disappointed with the ending.

So overall, a gruesome film that I never want to see again.

One of Scorsese's favorite movies.

John Patterson is depicted as being supportive toward African American families.  In reality, he was extremely racist.
Posted by Amanda at 9:45 AM