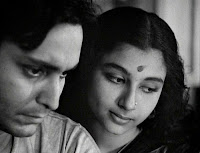 This is the second film of the Apu trilogy, the previous one being Pather Pacali.  I wasn't exactly eagerly awaiting the next installment of this series, mostly because the films are depressing as hell while still managing to be slightly dull.  Still, I gave this movie the benefit of the doubt and it wasn't entirely awful.

So first of all, what is the deal with this trilogy being listed as three separate movies while The Lord of the Rings trilogy is listed as one film? Talk about cutting corners…

Anyway, there is no real way to explain the plot of this film, without spoiling the first movie.  Let's just say that Apu's family has now moved but misfortunes still follow them wherever they go.  There is really no beginning or end, which is a common flaw in the second installment of trilogies.

I am trying to be nice about this film, but really, it is painful to sit through.  I don't mind sad movies, but when one tragedy after another happens, it is just tedious.  I suppose it is beautifully shot, but that is really the only thing I have to say about it.  I have high hopes for the next film, however, due to the way this one ended.

Ray was never quite sure if he was going to complete a cohesive trilogy, even after this film.  Maybe that is why The Book listed them as separate movies?

Time Magazine listed this as one of the 100 best films.
Posted by Amanda at 9:58 AM