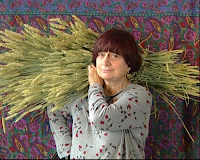 Kicking off the last century on this blog, we have a documentary about people who dig through garbage!  It is not quite as dull as it could have been, but I wouldn't exactly call it a strong start.  We only have seven more years to impress, people!

The film follows a series of gleaners as they...glean things.  Some of the gleaners search for food in fields, while many of the gleaners are urban based and forage for knickknacks and other personal items.  Agnes Varda's presences as a filmmaker plays a significant role in the movie, as she often draws parallels between artists and scavengers.

I did like how Varda inserted herself into the film.  I always appreciate when filmmakers do that with documentaries as it makes the viewing of the movie so much more special.  You are not just receiving information, you are going on a journey with someone.  Still, as the premise wasn't the most interesting of topics (to me, at least) I did find myself watching the clock a bit.  I guess not all films are trying to be on the edge of your seat thrillers, but its flatness will probably stop me from ever watching this again.

Translates to The Gleaners and The Gleaneress.
Posted by Amanda at 7:07 AM