The Matrix
1999
Directed by Lana Wachowski and Lilly Wachowski 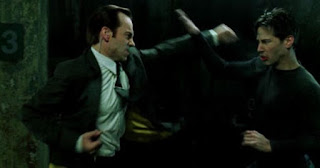 I am fairly certain that parts of this movie don't make an ounce of sense and that it overuses tired action cliches.  Still, I saw this with my brother when he was having his angsty teenager phase (which meant he was rarely available for socialization) so I will always kind of like this.

Machines have taken over the world and are now harvesting humans for energy.  This doesn't exactly scream plausibility but we will go with it.  Anyway, all human beings are plugged into the Matrix, which is a shared simulation of the world as it was in 1999.  Thomas Anderson is a computer hacker who grows suspicious of the world and the repeated instances of the mysterious phrase "the Matrix."  Agents of the Matrix come after him, but he is saved by a group of rebels.  The rebels believe that Thomas is the "One": the person destined to save the humans from the machines.  The leader of the rebels, Morpheus, gives him a choice: you can take a red pill and learn the truth about the Matrix, or take a blue pill that will return him to his old life.

Sorry if that plot synopsis was a bit confusing.  This film either went over my head or wasn't that well thought out to begin with.  Either way, it is still fun.  Neo dodging bullets might be one of the coolest things I have ever seen in my life. It is also fun to discuss which pill you would take.  I think I would take the blue.  Sorry humanity.

The opening scene took six months of training and four days to shoot.

Ewan McGregor turned down the role of Neo as he was working on Star Wars.