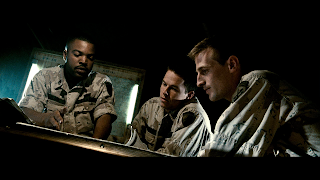 As I am going into surgery tomorrow (meaning Friday the 13th; trying not to read too much into that), I really needed a movie that was going to distract me completely.  This fit the bill and while it certainly wasn't perfect, it was entertaining enough to get my mind off the fact that I will be split open tomorrow.

At the end of the Persian Gulf War, four soldiers set out to steal the gold taken from Kuwait (with the help of a map found in an Iraqi officer's anus).  Major Archie Gates is a sexy, sexy officer who is disillusioned with war, Sergeant Troy Barlow has a wife and kid at home that he is desperate to return to, Sergeant Chief Elgin has basically no personality at all, and Private Conrad Vick is basically an idiot.  During their mission, they discover that people need their help, because, interestingly enough, American interventionism didn't solve a whole lot.

I won't comment too much on the politics of this one, although I am sure the sarcasm in the previous paragraph can give you some indication of my thoughts.  I will say I was pleased that some of the  soldiers seemed more interested in following their hearts than following orders.  I wish all soldiers had that philosophy.

Anyway, parts of this film did drag a bit for me, but for the most part, I was quite pleased with this one. It seemed to masquerade as lighthearted entertainment, but ended up delivering interesting political commentary.  And that is one good looking cast.

George Clooney and David O'Russell got into a fight during the filming of the climax because Clooney objected to the way O'Russell treated an extra.  So Clooney stands up for people in real life?  *Swoons*

Shot in the Arizona desert.