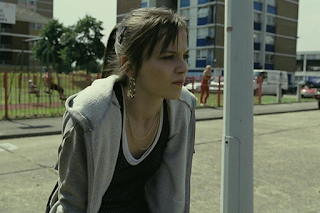 This movie reminds me of the previous List entry, An Education. Both films feature young women on the brink of maturity, whose lives are shaped by older men. But both movies feature very different classes, and you can see how Mia is limited in ways that Jenny Mellor was not.
Mia is a volatile teenager who dreams of being a hip hop dancer. Her verbally abusive mother starts dating Conor (Michal Fassbender) and Mia becomes (quite understandably) infatuated with him.
At first, I wondered if the dancing was really bad as a stylistic choice, sort of like in The Favourite. But now I think it's an aversion of the trope where the protagonist has a clear way out of their situation through their talent. It's also a way for Conor to groom and manipulate Mia.
Mia is a hard character to like, but for some reason I connected with her. I guess Kate Jarvis had no acting experience before this, but she balanced Mia's roughness and vulnerability really well.  I really enjoyed this, and not just because of my growing crush on Fassbender.
RATING: ****-
Interesting Facts:
The movie was filmed chronologically, and none of the actors knew what would happen to their characters more than a week in advance.
Katie Jarvis was offered the role after the casting director witnessed her having a fight with her boyfriend at a train station.
Posted by Amanda at 7:17 AM