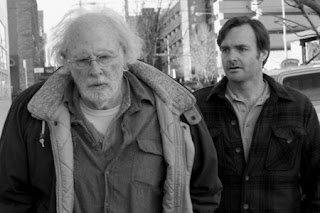 Alexander Payne movies are always comforting to me, and I could use the warm, cinematic hug right now. This was probably my least favorite Payne movie we've seen so far, but because it's Payne, it's still pretty good.

Woody Grant is desperately trying to get to Lincoln, Nebraska. He believes he has won a million dollar sweepstakes prize, and has to collect it in person, and he doesn't trust the mail with that kind of money. His long suffering son, David, realizes its a scam, but decides to help Woody get to Lincoln anyway, as Woody's increasing confusion makes it difficult to bond.

I usually fall in love with the characters of a Payne film within five minutes of starting the movie. Unfortunately, that didn't really happen here. I don't know what it was. Maybe I had a hard time taking Will Forte seriously, having seen him as a silly character in so many other things. Payne specializes in dark humor, but I had a hard time locating the humor in this situation. Of course, that might be because I am in a great deal of pain. But it's easier to blame it on Bruce Dern's crankiness.

I always like how Payne characters make attempts to improve their lives in really small ways. The theme was similar here, but I didn't feel for the characters that much. Oh well, thankfully, I have many more Payne movies I haven't seen.

Payne wanted to make this movie for years, but was only able to make it happen after the success of The Descendants.

First Payne movie where he didn't write the script.