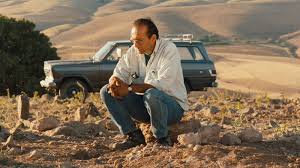 I was eager for a "slice of life" movie, which I tend to like, and was excited about checking this title out. It seemed like it was going to be an Iranian version of City Slickers. Unfortunately for me, the humor here didn't really translate.

Behzad, Keyvan, Ali, and Jahan are journalists intent on documenting the mourning rituals of a small Kurdish village. They pose as production engineers in an attempt to blend in better with the villagers. Much to their surprise, the old lady who was supposed to be the subject of the rituals keeps kickin', forcing them to remain in town and appreciate the lifestyle of the villagers.

It's often difficult for humor to survive crossing cultural lines, so I don't hold it against this film that the comedic aspects weren't really apparent to me. I felt a lot of this movie consisted of Behzad yelling on the phone. That's not to say I didn't enjoy certain scenes of the film, like when he connected with a local boy in the village. But for the most part, I was clock watching.

It was a nice ending though.

The title is a reference to a poem by Forough Farrokhzad, a famous Iranian poet.