The Age of Innocence
1993
Directed by Martin Scorsese 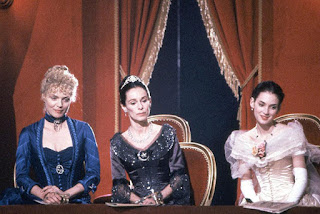 12 Martin Scorsese movies and counting. At least here, he is once again doing something wildly different, by adapting an early twentieth century novel. I guess this is his Barry Lyndon. Well, I happen to adore Edith Wharton, so I was very excited about this one.
Newland Archer, a lawyer and a gentleman, is head over heads in love with May Welland, a beautiful and naive young woman who is well-respected in New York society. That is, until he meets her cousin, Countess Ellen Olenska. Ellen has caused quite a stir, having come back to America after a disastrous marriage to a Polish count. May and Newland assist the Countess in reintegrating into New York society. Newland becomes increasingly turned off by May's innocence and lack of opinions in comparison to the more worldly Countess.
I usually feel like Daniel Day-Lewis is sucking all the air out of a room, but the character of Newland Archer allowed him to give a more subtle performance that really impressed me. I really love this story, I feel it's a classic tale of an older man trying to mold a young woman, then getting bored by his creation.
This won't appeal to everybody due to its melodrama, but I enjoyed it quite a bit. The glove scene was particularly...memorable.
RATING: ****-

This is the first Scorsese film to get a PG rating.
Winona Ryder wrote a book report on the novel in ninth grade.
Scorsese cameos as the photographer at a wedding.
Posted by Amanda at 5:09 AM