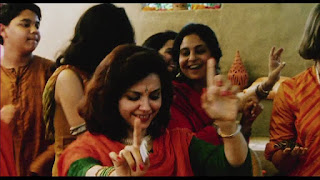 I haven't had much fun with the List's entries recently and this seemed like a good cure. Unlike most wedding movies, this one wasn't filled with wacky misunderstandings, but rather genuine human connections. I was moved. Metaphorically, of course, as I still can't leave my bed.
Lalit and Pimmi Verma have arranged a marriage for their daughter Aditi, because women being controlled is the theme of this blog lately. Because it's an Indian wedding, the entire extended family comes to celebrate. This introduces some interesting subplots, with the most compelling being the relationship between Aditi's cousin, Ria, and her uncle Tej.
I think a large reason that I liked this movie was the acting. The various family dynamics felt convincing, and the pain they felt seemed very real. I also really enjoyed watching the clash of modernism and traditionalism, and how the characters dealt with their struggles. The cinematography was also excellent. The riotous displays of color and music were welcome after the dreary entries I've experienced lately.
I wouldn't call it an unmissable movie, but it's the most fun I've had watching a film in awhile.
RATING: ****-
Interesting Facts:

A large chunk of original footage was destroyed by an airport X-Ray machine and had to be reshot.
Shot in about 40 days.
Posted by Amanda at 6:44 AM