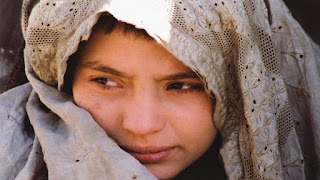 So I actually wrote a post for Osama already that somehow got erased. Oh, what a post it was. I assure you, you would have been impressed. Unfortunately, that ancient curse I invoked in December is probably still in effect, and the post has passed on. I'll try to recreate it as best as I can, but you can't capture lightning twice.
Osama is set in Afghanistan, under the Taliban regime. Under Taliban law, women must wear burqas and cannot work outside the home. This is a problem for anybody with a brain, but especially for an unnamed young girl, who only has her grandmother and mother to support her. The family becomes increasingly desperate and decides to dress the girl up as a boy, Osama, so that he/she can get a job. This ploy works fairly well, until Osama is drafted into a madrasa, a military training school for boys.
I couldn't help comparing this film to Wadjda, although Wadjda was much more hopeful and personal. This is a fairly upsetting watch, although it is interesting for what it is. This is the first Afghani movie released after the fall of the Taliban. It's fascinating that the very first one would be so bold and fearless.
So one of those movies you "should" watch, but probably won't enjoy.
RATING: *****
Interesting Facts:
All the actors in the film were amateurs from the city of Kabul.
The director deliberately went through the scenes after filming and removed the more hopeful parts, just to make me sad.
Posted by Amanda at 5:48 AM