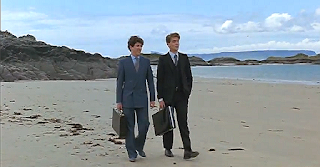 This is another movie that is tasked with the arduous job of distracting me from pain. Poor devil, it wasn't quite up to the mission.

"Mac" MacIntyre is recruited by his boss to acquire the village of Ferness in the Scottish Highlands for Knox Oil and Gas, mostly because his name sounds Scottish. This involves traveling to the village and getting to know the locals, including a marine researcher named Marina. Mac becomes conflicted about turning the quaint, peaceful village into a refinery.

So like I said, I was pretty uncomfortable watching this, which might influence my opinion a bit. Then again, Hero did the trick of distracting me from my pain, so maybe that's a good litmus test for movies. I found it to be a fairly typical story, without enough colorful characters to make it feel different.

The humor of English comedies doesn't always translate and I think that may be the case here with the comedic aspects of the film. Oh well, the other movies have been good lately.

Filmed in the style of old English Ealing comedies.