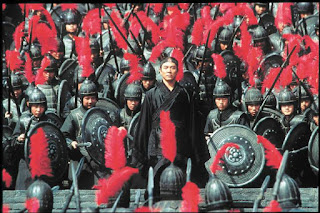 I want to thank this film for getting me through the previous night, as I was in a great deal of pain yesterday. This movie really helped distract me, and was great way to pass the time as I waited for my medication to kick in. Between the sword fights and the many plot twists, I was almost able to get my mind off it for awhile
Hero takes place during the Warring States Period in Ancient China. Nameless, a Qin prefect, arrives at the Qin capital to meet with the King. The King has a rule that no visitors are allowed within 100 paces of him. Nameless claims to have killed three assassins that have made attempts on the King's life: Long Sky, Flying Snow, and Broken Sword. Nameless tells his version of events, then the King tells his version of events. Sorry, it's difficult to summarize this one without giving too much away.
Visually, this movie is stunning and I wasn't surprised to learn that this was the most expensive Chinese film ever made. The care that went into the aesthetics of each scene was unbelievable. The fight scenes felt more like ballet performances. I also love the structure of the movie, and how it kept you guessing throughout its entire length.
Highly recommended for anybody that loves film, even if wuxia films aren't typically your thing.
RATING: ****-
Interesting Facts:
Quentin Tarantino helped get this movie released in America.
The Qin empire preferred the color black, even for their horses.
Posted by Amanda at 6:40 AM