The Last King of Scotland
2006
Directed by Kevin MacDonald 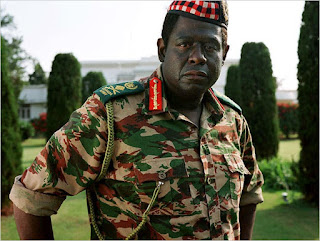 My phone plan recently allowed me to get HBO Max for free, which is a dream come true for a person recovering from the worst surgeries of one's life. They have a good selection of non List movies I can enjoy. They also have a handful of movies from my remaining titles on the List that I can check off. The one I was most eager to see was The Last King of Scotland.

The film tells the fictional story of Nicholas Garrigan, a Scottish doctor who travels to Uganda, partly to help people, and partly because he is desperate for an adventure. He witnesses Uganda's new president speaking, and sincerely believes that Idi Amin will be good for the country. He treats Amin after a minor car accident, and is appointed as Amin's personal physician. Slowly, he realizes exactly what he signed up for.

It's amazing how often complete psychopaths obtain power. In hindsight, it always seems incredible that people would allow it to happen. Here, we get to see exactly how a good person can ignore all the red flags until it's too late and fall under the spell of a crazed despot. I'm not sure if this film has been criticized as yet another Black story being told through the eyes of a white man, but I think an outsider perspective works here.

And of course, props must be given to Forrest Whitaker, who gave an amazing performance. He had great chemistry with the similarly talented James McAvoy. Anyone who wants to learn more about world history, or wants to see McAvoy's butt, will really enjoy this movie.

Forest Whitaker stayed in character as Idi Amin when they weren't filming. How else would he get his Oscar?

Idi Amin declared himself King of Scotland in the 70s.