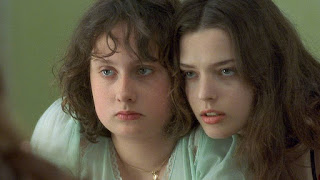 There is nothing more awkward that teens losing their virginity. I cringed my way through the movie, right up until the end. That ending, of course, elicited a different reaction.

Anais and Elena are sisters and fight about typical sister things, like copying and clothes. I don't think I have ever fought with my sister about clothes, but in movies it's always the staple of sisterhood. Anyway, Anais is ready to lose her virginity, and Elena is intent on keeping hers. Elena's pushy boyfriend, Fernando, proves that men will say just about anything to get a woman (or, in this case, girl) into bed. Neither one of their sexual agendas turn out as planned.

Catherine Breillat was clearly trying to shock us, and she certainly succeeded. It's a movie that I will have to ponder and I'm not altogether happy that I watched it. For some reason, the title A Ma Souer has been translated to Fat Girl. This is odd, because it almost seems like Elena is the character we are supposed to sympathize with, while the eponymous Fat Girl just watches from the side. Of course, this changes at the end of the film.

It's easy to watch this entire movie with a cynical eye, but the main characters' innocence in certain situations is genuinely moving. Personally, I hated the ending, but it didn't stop me from liking the rest of the film.

Anais Reboux's mother lied to her about the dog dying in order to get her to cry for a scene.