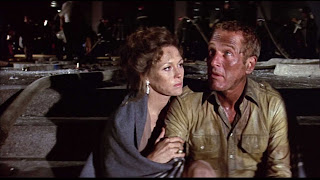 When the actors involved with a project end up hating the film (Paul Newman called it a "turkey"), you know it's probably not going to be a great movie. But it appears that many movies I do love owe a lot to this film, so I suppose its inclusion on the List is justified.

Architect Doug Roberts (Newman) returns to San Francisco for the grand dedication of the Glass Tower, which he designed for James Duncan. The Glass Tower has 138 stories, making it the tallest building in the world. During the party, a fire starts on the 81st floor, because somebody thought it was a good idea to put paint thinners next to a circuit breaker. As in most disaster movies, the action is heavily based off of the characters behaving as stupidly as possible in a situation. Then again, I am sure that it is how people handle emergencies in real life, so I suppose it's justified.

Wow, two hours and forty-four minutes. That's a long run time, even when you have Newman's steely blue gaze to dive into. This movie takes on a different sort of tinge after 9/11, which makes it sort of a dark watch, as opposed to Die Hard. I actually kept wishing I was watching Die Hard.

It's fun seeing some older movie stars though, with the exception of OJ Simpson.

1,000 real firemen were hired throughout the entire production.

William Holden demanded top billing (but failed to get it), and Steve McQueen threw a fit that Paul Newman had 12 more lines of dialogue than he did.