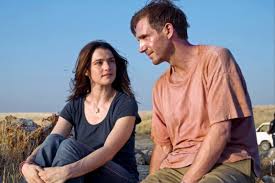 I think the days of happy List movies are done, and what we are left with a collection of films ranging from bleak to downright miserable. Recently we've had a documentary on the Syrian uprising, a dark comedy about suicide bombers, and a drama about a Polish nun whose family was killed in the Holocaust. The Constant Gardener is pretty sad as well, although it seems almost cheerful in comparison to the other List offerings.
Justin Quayle is a British diplomat in Kenya. He tries to solve the murder of his wife Tessa, an Amnesty activist who was investigating a suspicious drug trial. Their love story is told in flashback as Justin realizes he didn't know his wife as well as he thought.
I had never heard of this book/movie before, and from its title I gauged that it was going to be some sort of Lady Chatterly's Lover type story. Instead, it was a pretty effective thriller, even if it was moving in a fairly predictable direction the entire time. I'm not the biggest Ralph Fiennes fan, but Rachel Weisz definitely earned her Oscar for this film.
It was upsetting to see the condition of the slums of Kibera. Apparently the cast and crew were so affected by what they saw that they set up a Constant Gardener Trust which has helped fund freshwater tanks, a school in Kibera, and the construction of a bridge to allow easier access to health clinics. I guess Voldemort had a change of heart.
RATING: ****-
Interesting Facts:
Lupita Nyong'o worked as a production runner during filming in Kenya.
Kibera residents live on less than $.80 per day.
Based on a John Le Carre novel.
Posted by Amanda at 9:35 AM