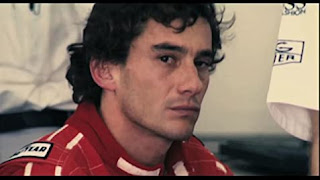 A good documentary can make you care about any subject, even racecar driving. I know there are many people attracted to the art of driving really fast in circles. I don't doubt that it's a rush for the maniacs in the cars, I just don't find it particularly interesting to watch. But Ayrton Senna was a worthy subject for a documentary.
The film focuses on Senna's racing career, from his debut in the 1984 Brazilian Grand Prix to his death at the 1994 San Marino Grand Prix. The documentary consists of interviews, race footage, and even some Senna family videos.
I'll be honest, I had no idea who Senna was before this documentary. International motor racing isn't that big of a deal in America, and I don't hang out with the NASCAR crowd. But the film did a good job of communicating what a big deal he was in Brazil. It was fascinating to see how his dedication to his sport pretty much amounted to a death wish.
I particularly enjoyed the parts that focused on his rivalry with Alain Prost. An interesting look at a very, very handsome man.
RATING: ***--

Interesting Facts:
First film about Senna that had the approval of Senna's family, and the approval of Formula One management.
First documentary film produced by Working Title Productions.
Posted by Amanda at 6:42 AM