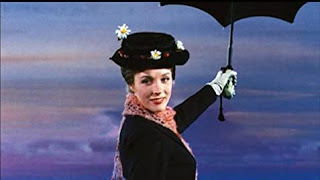 This is one of those movies that is deserving of its place on the List, but that doesn't make it an enjoyable watch. It's a cutesy film that I am sure holds a lot of nostalgia for many people. But it was never a favorite of mine to watch growing up. We stayed away from the more saccharine movies in my day.

Mary Poppins descends from the clouds to take care of the Banks children, Jane and Michael. I guess Mr. Banks and his wife don't really pay attention to their children, but if there really is an umbrella-wielding deity who can use magic whenever she wants, surely there were children in 1910 London more deserving of her help. Like, say, the chimney sweeps.

A musical is only as good as its songs, and although many of these songs are iconic, I don't like a single one. If I had to choose, I would say that "A Spoonful of Sugar" is perhaps the least obnoxious. I also didn't like the animation sequences. I suppose it was a technical achievement at the time, now it just feels trippy and out of place.

So like I said, it is definitely 1001-worthy, but personally I find these kinds of cloying movies hard to stomach.

P.L. Travers, the author of the original novel, hated this movie so much that she left the premiere in tears.

Elizabeth Taylor was considered for the role of Mary Poppins.