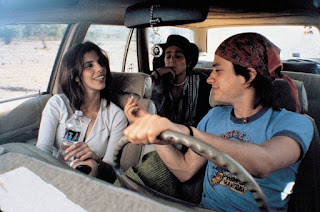 Well, I've been hankering for a comedy for awhile now. Unfortunately, this one contains teenaged boys. I don't like teenaged boys. Based on my experience in high school, I'm comfortable guessing that the feeling is mutual. Gross out humor isn't my thing, and boys are pretty gross.

With their girlfriends on vacation, best friends Julio and Tenoch go to a wedding and meet the alluring Luisa. The actress who plays Luisa was actually the wicked stepmother in another List movie, Blancanieves. She also has an interesting take on maternalism here. After learning that her husband cheated on her, Luisa asks to accompany the boys on a trip to a beach they bragged about, not knowing that beach in question was made up by the boys in an effort to impress her. Ever seen the movie Bandits? It's kind of like that.

Just how young are these boys supposed to be anyway? I thought this was fairly disturbing, and the sex scenes were all excruciatingly awkward to watch. I suppose some will hail this as a brave exploration of teenage sexuality. Um, okay. That's not really territory I want to venture into, quite frankly.

Also, I thought the narration was unnecessary. I think I've had about as much of Alfonso Cuaron as I can take.

The ending scene was the first scene filmed.